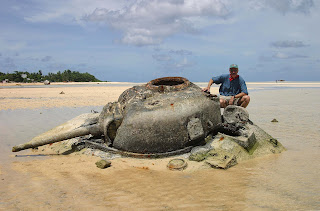 John C. Shively (seen in the photograph at left on a visit to Tarawa) is a practicing physician with a longtime interest in World War II. He lives in Lafayette, Indiana. He is the author of The Last Lieutenant: A Foxhole View of the Epic Battle for Iwo Jima, published by Indiana University Press in 2006. Here he answers questions about his new book from the IHS Press, Profiles in Survival: The Experiences of American POWs in the Philippines during World War II.

What inspired you to write about Indiana POWs of the Japanese in the Philippines during World War II?

During my research about the fall of the Philippines, the Death March, and the POW experience I learned about other Hoosiers who had survived the war as POWs of the Japanese. The common thread through the descriptions of their experiences as POWs was their dogged determination to survive no matter what the Japanese did to them. After hearing and reading what they went through I decided that these stories needed to be preserved so that future generations would not forget that during some of the darkest days of World War II in the Pacific, when it seemed that their situation was hopeless, they refused to give up. They may have been ordered to surrender and lay down their arms and submit themselves as prisoners to the Japanese, but they did not surrender their humanity or their dignity. America may have seemingly forgotten them, but they did not waver in their love for and belief in America. They tenaciously held on to their ability to overcome their predicament and never lost faith in themselves or their cause. The Japanese beat and abused them, but they could not extinguish the flames that fuel the human spirit and the innate survival instinct. It is a lesson for us all.
Have you always been interested in the Pacific theater of operations?

Is there one portion of the POWs story that had the greatest effect on you while you were writing the book?

The one part of the POW experience that most moved me was the sheer brutality and disregard for human life and suffering perpetrated by the Japanese guards on their American and Filipino captives. This was most vividly demonstrated during the immediate post-surrender period and more graphically during the Bataan Death March. After the surrender, the POWs were subjected to the most humiliating and degrading treatment even before the Death March began. The treatment of defenseless POWs during the Death March defies understanding and comprehension. Along the Death March route, Japanese guards routinely murdered prisoners for the most trifling offenses or for mere sport. They had absolutely no regard for the pain and suffering of their captives. And, this brutal treatment was not limited to American and Filipino combatants.  Philippine civilians caught throwing food to the prisoners or otherwise demonstrating solidarity with them were singled out by the Japanese guards and routinely beaten, raped, and murdered. It was very disturbing to hear and read about these events, but I included them in the book without withholding any details. I thought it necessary to set the unvarnished record straight.
How did these POWs survive the horrible treatment they received during their captivity?

This is a very good question and one I am not entirely sure I have an adequate answer to. Given what I have heard from ex-POWs and an understanding of the conditions in the camps and aboard the hellships, the brutal and inhumane treatment by the guards, the rampant disease, both infectious and nutritional, in the camps, and the psychological trauma brought on by a sense of utter hopelessness and despondency that the prisoners experienced, I don't see how any of them survived. I think most people subjected to these conditions for any length of time would have given up and just crawled into a hole to die as a way to end their misery. Some in the camps did, but many did not. What personality traits separated those who would survive from those who gave up and died? There had to be something else that some had that others did not.

I got to know quite well two ex-POWs having spent much time with them over the years. Both are now deceased, but while I knew them I had a chance to look into their psyches. Both were obstinate, bullheaded, and stubborn almost to a fault. I believe it was these traits that saw them through the most trying time in their lives and allowed them to survive nearly three years as POWs. In some cases such as on the hellships, an unquestionable degree of luck was important. But, it took more than luck to survive three years of hell under the Japanese. It is my conviction that the only way these two ex-POWs would not survive the war was if the Japanese simply murdered them. They made up their minds early during their captivity that they were going to survive. I think this kind of an attitude was essential to surviving.

Do you have another book project in mind?

Yes, I have a couple ides for another book. I know another ex-POW who has a compelling story about his experience in the war. He survived the Death March and was in Camp Cabanatuan when it was liberated by 6th Rangers on January 30, 1945. I also have interviewed two principle participants who played pivotal roles in the success of the raid to liberate the POWs in the camp. I would like to write a book that would include the POW story, and the stories of these two other warriors' experiences in the war that ultimately brought these three together in the climactic raid on Cabanatuan. One of these was a Ranger who planned and led the raid. The other one was an Alamo Scouts who reconnoitered the camp the day before the raid to gather intelligence about the Japanese disposition in the camp. This intelligence was invaluable to the Rangers in their final plans for the raid. Little is known of the Rangers and the Alamo Scouts and their contribution to the war effort in the Pacific other than the raid on the camp. The book I have in mind would include all three of these stories. They would be told separately until the night of January 30, 1945, when they converge at Camp Cabanatuan for the liberation of the camp.

The other idea is for a book about a general history of the Pacific war that would include the stories I have collected over the past ten years from interviewing Hoosier vets of the war. I plan to insert these stories into the various chapters about the war that cover the iconic battles in which these Hoosiers participated. In this way, the reader would learn about the war in broad strokes, but would also learn about it from the personal perspective by those who fought it. I think this is a more compelling and interesting way to learn history  It might well serve as a textbook for young Hoosier students who want to learn more about not only the war, but about the contribution to the war effort by Hoosiers who went before them.
Posted by Indiana Historical Society Press at 8:11 AM