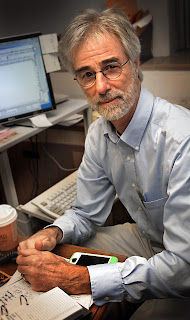 What influenced you to go into the journalism profession?

I fell into writing not long after I learned to read, and fell in love with bylines and readers as a high school newspaper reporter. College in the 1960s, an era of explosive politics and social change, sealed the deal for one who yearned to be in on the action, or more precisely on the edge of it.

What were some of your early jobs with newspapers?

First was the Greenfield (Ind.) Daily Reporter, where I covered police, fire, city hall and, on nights and weekends, high school sports. I also learned photography there by the sink-or-swim method. Next, 180 degrees removed, was the Milwaukee Courier, an African-American weekly where I practiced by straight and advocacy journalism and learned the priceless lesson that "straight" depends on where one stands.

How do you come up with the ideas for your columns?

The general flow of news provides lots of ideas for spinoff features, further digging and commentary. Countless contacts accumulated over all these decades keep me supplied with possibilities and in touch with pursuits, people and causes that otherwise would be ignored or not given justice. My reading beyond the news, from history to poetry, often inspires themes and style turns.

Over the years, have you received regular comments from readers, both positive and negative, on your work?

Many, but rarely a deluge on any single story. Gun control, religion, President Obama, marriage equality and Bob Knight (still) can be counted on to stir response. Rarely is there not a fair distribution of positive and negative.

With all the problems seemingly besetting the profession, would you encourage young people to pursue journalism as a career?

Absolutely. But be nimble. The technology and market trends that have us multi-tasking and risking accuracy and nuance for speed and distribution will doubtless continue to accelerate and change. The writer who wishes to tell rich, humane, politically courageous, exhaustively researched stories will find his/her New Yorkers, Salons and even room in the daily "press." But he or she will need a closet full of hats to get established as an employee. Freelancers and bloggers likewise will have to be more resourceful than ever if they're to make a living. There's always PR and advertising, and more power to them. But we know what kind of word-and-picture-maker America needs. Desperately.

Any ideas for future writing projects?

I'm fussing with a second book of poems for breathlessly waiting publishers out there. I also pine to write some intensive magazine-type stories from some of the locales I have observed from afar as a local newsie -- Haiti, Cameroon, the Middle East, etc. I am weighing the notion of teaching for a semester or so in a foreign country and writing about the experience, the place, the people.

Posted by Indiana Historical Society Press at 8:35 AM 7 comments: 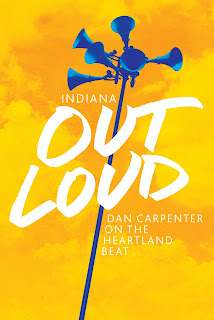 Since 1976, Dan Carpenter’s writing has appeared in the pages of the Indianapolis Star as a police reporter, book critic, and renowned op-ed columnist. In writing for the state’s largest newspaper, Carpenter has covered the life and times of some notable Hoosiers, as well as serving as a voice for the disadvantaged, sometimes exasperating the Star’s readership in central Indiana as the newspaper’s “house liberal.”

As Carpenter notes, the book “presumes to make itself heard as a distinct voice of this place in this time of economic struggle, political divisiveness, creative persistence, flammable faith, terror brought home and war, seemingly, without end or limit.

“The cumulative sound comprises the sweet and strident, the measured and manic, the deafening and the barely detectable. It is as sharp as the orchestrations of a legendary neighborhood grocer and as seductive as the baritone riffs of a celebrated junkie poet. It shrieks against arbitrary war and enforced poverty. It sings the pain of inevitable loss and the praises of improbable gift-bearers.”

Carpenter is an Indianapolis native and a graduate of Cathedral High School and Marquette University. In addition to his work for the Indianapolis Star, he has published poetry in Illuminations, Pearl, Poetry East, Flying Island , Tipton Poetry Journal , and Southern Indiana Review. Carpenter’s book Hard Pieces: Dan Carpenter’s Indiana, was published by Indiana University Press in 1993. He lives in Indianapolis’s Butler-Tarkington neighborhood with his wife, Mary, and children, Patrick and Erin.

Indiana Out Loud costs $16.95 and is available from the Indiana Historical Society's Basile History Market.