The judge for the category said of the book: "Ray E. Boomhower's thoroughly researched and documented biography of Jim Jontz is a touching story well told--an inspiring portrait of a man's passion for the environment."

Posted by Indiana Historical Society Press at 10:56 AM No comments:

A number of IHS Press books have been named as finalists in the annual Midwest Book Awards sponsored by the Midwest Independent Publishers Association. Winners will be announced on May 8 at the Bloomington Center for the Arts in Bloomington, Minnesota.

The IHS Press books named as finalists are:


Posted by Indiana Historical Society Press at 10:04 AM 2 comments:

The Mystery of a Totem Pole 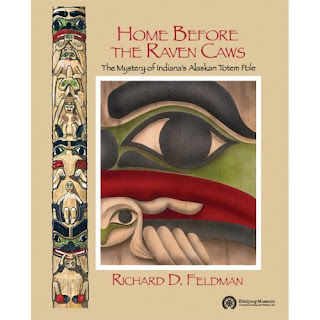 In 1903 Alaska governor John Brady collected fifteen old totem poles for preservation at Sitka National Historical Park, creating one of the most famous collections of totem poles in the world. One pole became separated, and its fate remained a mystery for nearly ninety years.

Written by Richard D. Feldman, Home before the Raven Caws: The Mystery of a Totem Pole, published by the IHS Press in cooperation with the Eiteljorg Museum of American Indians and Western Art
, unravels the mystery of that missing pole from the Brady collection. The old Alaskan pole found its way to Indiana more than a hundred years ago. A new version of the pole stands today at the Eiteljorg.

Feldman is a family physician who has a longtime interest in Native American religion, art, and culture, having studied with the renowned scholar Joseph Epes Brown at Indiana University, Bloomington. Feldman was adopted into the Haida nation by Mary Yeltazie Swanson in 1996. Feldman lectures frequently on a variety of medical as well as historical topics and has been the subject of several public television documentaries.

Home before the Raven Caws costs $15.95 and is available from the Indiana Historical Society's Basile History Market.

Posted by Indiana Historical Society Press at 10:03 AM 1 comment: