Wes D. Gehring is a professor of film at Ball State University and an associated media editor for USA Today Magazine, for which he also writes the column “Reel World.” The award-winning author of twenty-eight books, Gehring has written biographies of such screen legends as Charlie Chaplin, W. C. Fields, the Marx Brothers, Laurel and Hardy, Irene Dunne, Carole Lombard, James Dean, Steve McQueen, and Red Skelton. Here he answers some questions about his new biography of Hoosier film director Robert Wise:

What drew you to write about Wise?
I was drawn to Wise because of his neglect as an auteur. He was always getting the left-handed compliment of being a "craftsman," but somehow critics missed his consistent themes & character types. Also, he is fascinating because he made classic films in multiple genres.

How important were Wise’s Indiana roots to his subsequent career in films?
Of all the Hoosiers in Hollywood I've written about, other than Red Skelton, his Hoosier/depression era roots were most central to Wise's film career.

Is there one element that makes Wise’s films immediately identifiable to film fans?
The key element of a Wise picture is his passion for painful stories about the disenfranchised, exasperated by age, gender, and/or racial prejudice.

Posted by Indiana Historical Society Press at 3:00 PM No comments: 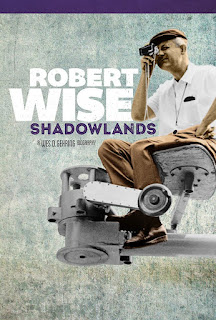 Born in Winchester, Indiana, Robert Wise spent much of his youth sitting in darkened movie theaters enthralled by the swashbuckling heroics of screen legend Douglas Fairbanks Sr. Through these viewings, Wise developed a passion for film—-a passion he followed for the rest of his life, making movies in Hollywood.

In the new IHS Press biography Robert Wise: Shadowlands, nationally known film historian Wes D. Gehring explores Wise’s life from his days in the Hoosier State to the beginning of his movie career at RKO studios working as the editor of Orson Welles’s classic movie Citizen Kane. Wise is best known for producing and directing two of the most memorable movie musicals in cinema history, West Side Story (co-director Jerome Robbins) and The Sound of Music, for which he won four Academy Awards—two Best Picture and Best Director Oscars. But, as Gehring notes, other than Howard Hawks, Wise was arguably Hollywood’s most versatile director of various celebrated genre films. For example, his roots in horror go back to a tutelage under the great producer Val Lewton, with Wise directing Boris Karloff’s chilling The Body Snatcher (1945) for Lewton. Years late Wise brilliantly adapted a Shirley Jackson novel as a homage to Lewton, The Haunting (1963). No less a horror aficionado than Stephen King later gave both Jackson’s novel (originally entitled The Haunting of Hill House) and the film his highest praise in his nonfiction study of horror, Danse Macabre.

In an American Film Institute seminar in 1980 Wise told students, “People ask me, do I prefer to do musicals to drama or comedy? I like them all. If it’s good, exciting, gripping, original material, that’s what’s important, what counts.” Wise died on September 14, 2005, four days after his ninety-first birthday.

Gehring is a professor of film at Ball State University and an associated media editor for USA Today Magazine, for which he also writes the column “Reel World.” The award-winning author of twenty-eight books, Gehring has written biographies of such screen legends as Charlie Chaplin, W. C. Fields, the Marx Brothers, Laurel and Hardy, Irene Dunne, Carole Lombard, James Dean, Steve McQueen, and Red Skelton.

Robert Wise: Shadowlands costs $24.95 and is available from the IHS's Basile History Market.

Posted by Indiana Historical Society Press at 7:47 AM 1 comment: