An Indiana politician and environmentalist, a Hollywood movie director, a mysterious totem pole, and a beloved Indianapolis store will all be featured in this summer's Indiana Historical Society Author Series. The programs, free and open to the public, begin at noon in the multipurpose room at the Eugene and Marilyn Glick Indiana History Center, 450 West Ohio Street, Indianapolis.

The Author Series schedule is as follows:
Posted by Indiana Historical Society Press at 8:12 AM 5 comments: 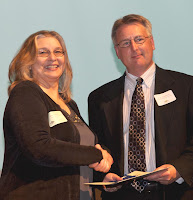 The IHS Press book L. S. Ayres and Company: The Store at the Crossroads of America, written by Kenneth L. Turchi, won first place in the Midwest Regional Interest: Text category at the 23rd annual Midwest Books Awards. Ray E. Boomhower, senior editor at the Press, was on hand at the event in Bloomington, Minnesota, to receive the award from Sherry Roberts, chair of the Midwest Independent Publishers Association, the group that sponsors the awards.

The competition attracted 187 books, entered in 44 categories, from 75 publishers in a 12-state Midwestern region. The Midwest Independent Publishers Association is a nonprofit professional association that serves the upper Midwest publishing community, advancing the understanding and appreciation of publishing production, promotion, and related technologies, professions, and trades.

Also, the IHS Press book Indianapolis: A City of Immigrants, written by M. Teresa Baer, is one of three finalists in the Teen: Nonfiction category in the 2013 Benjamin Franklin Awards competition sponsored by the Independent Book Publishers Association. Winners will be announced at a May 29 ceremony at the Marriott Marquis Hotel in New York City.
Posted by Indiana Historical Society Press at 10:44 AM 6 comments: