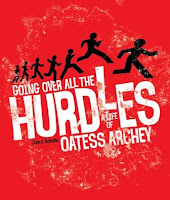 Sabrina Carnesi of the AASL wrote about the book: "The biography of a college track star who, with a university degree, had to take a custodial job with his hometown school system, due to racism, before later rising to become a beloved teacher, coach, sheriff, and FBI agent. The word 'hurdles' is both literal and symbolic. It represents the hurdles Archey had to master in his college track career and the hurdles he had to overcome in life."

Beineke was born in Indianapolis and grew up in Marion, Indiana. His undergraduate degree in social studies was from Marion College, now Indiana Wesleyan University, and his masters and doctoral degrees were from Ball State University in education and history.

Beineke has been a public school teacher, a college professor and administrator, and a program director in leadership and education at the W. K. Kellogg Foundation. He is currently dean of the College of Education and a professor of educational leadership and curriculum and also professor of history at Arkansas State University.
Posted by Indiana Historical Society Press at 9:29 AM No comments:

Author Cym Lowell has written a review of the IHS Press book "To Bear Any Burden": A Hoosier Green Beret's Letters from Vietnam on his blog.

From 1968 to 1969, Daniel H. FitzGibbon, a Columbus, Indiana, native, graduate of West Point, and today an Indianapolis attorney, served as a captain with the Fifth Special Forces in South Vietnam. During his time in country, FitzGibbon wrote letters to his parents back home in Columbus about his experiences running two Special Forces A team camps, one located in the north central portion of South Vietnam, and the other near the country's border with Cambodia.

FitzGibbon's letters were saved by his mother and were given back to the veteran, who typed and copied them for his children so they would know "what Daddy did in the war."
Posted by Indiana Historical Society Press at 11:43 AM 2 comments:

This new award seeks to recognize the contributions of Indiana authors to the literary landscape in Indiana and across the nation by the Indianapolis-Marion County Public Library Foundation, and is funded by the generosity of The Glick Fund, a fund of Central Indiana Community Foundation.

Nominations were submitted from across the state in early spring. Any published writer who was born in Indiana or has lived in Indiana for at least five years was eligible. A seven-member, statewide Award Panel selected the national winner and finalists in three categories from the pool of publicly nominated authors:

• National Author - $10,000 prize: a writer with Indiana ties, but whose work is known and read throughout the country. National authors were evaluated on their entire body of work. Winner: James Alexander Thom; Finalists: Scott Russell Sanders and Margaret McMullan

• Regional Author - $7,500 prize: A writer who is well-known and respected throughout the state of Indiana. Regional authors were evaluated on their entire body of work.Finalists: Jared Carter, Madison, and Neville

Award finalists in all three categories will be honored on September 26, 2009 at the Central Library in downtown Indianapolis. The day’s events will include free public programming such as author lectures, “how to get published” workshops for aspiring writers, and more. An award dinner/fund raiser benefiting the Library Foundation will follow that evening where the winner of the Regional Author and Emerging Author categories will each be named. Thom will serve as the dinner’s keynote speaker. Ticket information for the award dinner is available by contacting the Library Foundation at (317) 275-4700 or by visiting www.indianaauthorsaward.org.

Madison is the author of the IHS Press books Eli Lilly: A Life, 1885-1977, Indiana through Tradition and Change: A history of the Hoosier State and its People, 1920-1945, and The Indiana Way: A State History (co-published with Indiana University Press). Neville wrote the IHS Press publication Twilight in Arcadia: Tobacco Farming in Indiana. Madison, Neville, and Carter have also written for the IHS Press's popular history magazine Traces of Indiana and Midwestern History.
Posted by Indiana Historical Society Press at 8:34 AM No comments: