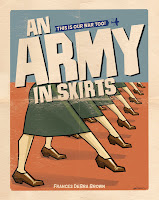 More than 150,000 women served in the Women's Army Corps (WAC) in World War II. Although the majority of WACs were assigned to duties in the United States, several thousand received overseas assignments.

One of these women was Frances DeBra Brown from Danville, Indiana, who worked as a draftsman at American headquarters in London and Paris. An Army in Skirts: The World War II Letters of Frances DeBra, recently released by the IHS Press, contains the letters that Frances wrote to her family and letters from family and friends to Frances. The letters vividly detail her World War II service, beginning with basic training at Fort Oglethorpe, Georgia.

After an assignment at an army air field in Marianna, Florida, where DeBra worked on the post newsletter, she was shipped overseas on the RMS Queen Mary. While in London she worked through buzz bomb and V-2 rocket attacks, slept in shelters fully clothed, and made the acquaintance of a young English woman and her family. Arriving in Paris two weeks after the city’s liberation, Frances witnessed the city’s devastation and the effects of war on the populace. During her stay in Paris she attended classes at the École des Beaux-Arts and received a marriage proposal.

Frances DeBra Brown, a teacher, artist, and art conservator, lives in Yazoo City, Mississippi. A prize-winning miniature artist, her work was accepted by the Royal Society of Miniature Painters, Sculptors, and Gravers for its art show at The Mall Galleries, The Mall, London, England. She is a member of the American Institute for Conservation and the International Institute for Conservation and has cleaned and repaired hundreds of paintings and has done conservation work for the Mississippi State Capitol, the Hall of Governors, and the Old Capitol of Mississippi Museum.

An Army in Skirts costs $27.95 and is available from the Society's Basile History Market. To order, call (800) 447-1830 or order online at the History Market.
Posted by Indiana Historical Society Press at 1:12 PM 1 comment:

Norbert Krapf, author of the IHS Press book The Ripest Moments: A Southern Indiana Childhood, has been named Indiana Poet Laureate by the Indiana Arts Commission. Krapf discusses his appointment on his web site.

IAC is charged with selecting the Poet Laureate, providing an annual stipend and per diem, and working with the State Department of Education in scheduling appearances.

Krapf's poetry collections include Somewhere in Southern Indiana, The Country I Come From, which was nominated for the Pulitzer Prize in Poetry, Looking for God's Country, Invisible Presence: A Walk through Indiana in Photographs and Poems, and Bloodroot: New and Selected Indiana Poems.
Posted by Indiana Historical Society Press at 10:19 AM No comments: 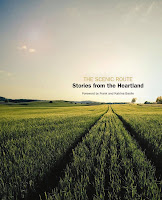 The IHS Press publication The Scenic Route: Stories from the Heartland received a gold award in the essays category of ForeWord Magazine's tenth annual Book of the Year Awards. Two hundred and twelve winners in sixty categories were honored in a ceremony at BookExpo America in Los Angeles. These books, representing the best work from independent publishers in 2007, were selected by a panel of librarian and bookseller judges.

The Scenice Route celebrates the twentieth anniversary of Storytelling Arts of Indiana, which promotes the art and use of storytelling in everyday life through its annual festival, concerts, workshops, programs, and other events.

Storytelling is about gathering with freinds, family, and even those we have just met to share with one another stories of our childhood, our culture, and our heritage. In this age of over-scheduled lives, Internet and television addictions, and outside pressures, stories remind us of our roots and traditions.

Storytelling Arts of Indiana has spent twenty years creating places for individuals to come together and experience storytelling in the hope of encouraging that sharing and listening relationship in our everyday lives. The Scenice Rout offers the reader a dozen stories to enjoy and to help us remember.

The books costs $8.95 and is available from the Society's Basile History Market. To order, call (800) 447-1830 or order online at the History Market.
Posted by Indiana Historical Society Press at 7:50 AM No comments: