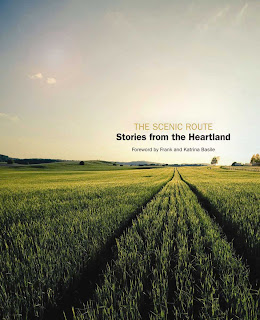 With the publicatin of The Scenice Route: Stories from the Heartland, the Indiana Historical Society Press celebrates the twentieth anniversary of Storytelling Arts of Indiana, which promotes the art and use of storytelling in everyday life through its annual festival, concerts, workshops, programs, and other events.

Storytelling is about gathering with freinds, family, and even those we have just met to share with one another stories of our childhood, our culture, and our heritage. In this age of over-scheduled lives, Internet and television addictions, and outside pressures, stories remind us of our roots and traditions.

Storytelling Arts of Indiana has spent twenty years creating places for individuals to come together and experience storytelling in the hope of encouraging that sharing and listening relationship in our everyday lives. The Scenice Rout offers the reader a dozen stories to enjoy and to help us remember.

The books costs $8.95 and is available from the Society's Basile History Market. To order, call (800) 447-1830 or order online at the History Market.
Posted by Indiana Historical Society Press at 12:26 PM No comments: 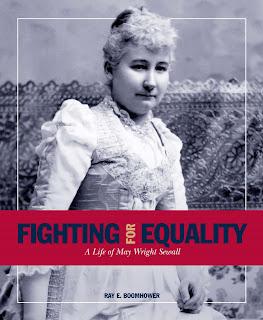 Famed Indiana author Booth Tarkington once took on the task of naming three of Indianapolis’s most outstanding citizens. Two of the three he named—former president Benjamin Harrison and legendary poet James Whitcomb Riley—were well-known people. The third, however, was someone whose memorable accomplishments have become lost to history—educator, woman’s rights pioneer, and peace activist May Wright Sewall.

Written by award-winning author and historian Ray E. Boomhower, Fighting for Equality: A Life of May Wright Sewall, a biography aimed at young readers, showcases Sewall’s important contributions to the history of Indianapolis, Indiana, the United States, and the world. A woman who had the “organizing touch,” Sewall helped to establish such Indianapolis institutions as the Girls’ Classical School, the Indianapolis Woman’s Club, the Contemporary Club, the Art Association of Indianapolis (today known as the Indianapolis Museum of Art), and the Indianapolis Propylaeum.

Sewall also worked tirelessly on behalf of rights for women in the United States—and around the globe—during the late nineteenth and early twentieth centuries. She served as a valuable ally to such national suffrage leaders as Susan B. Anthony and Elizabeth Cady Stanton and gave the woman’s movement an worldwide focus through her pioneering involvement with the American National Council of Women and the International Council of Women.

After working on behalf of peace as a delegate on millionaire automaker Henry Ford’s failed Peace Trip in 1915, Sewall shocked her friends by releasing a book telling of her communications beyond the grave with her deceased husband, Theodore Sewall. She related her remarkable experiences with spiritualism in her book Neither Dead nor Sleeping, published by Bobbs-Merrill of Indianapolis in 1920 just a few months before Sewall’s own death.

Fighting for Equality: A Life of May Wright Sewall costs $17.95 and is available from the Society's Basile History Market. To order, call (800) 447-1830 or order online at the History Market.
Posted by Indiana Historical Society Press at 10:52 AM No comments: