Steamboats on the Ohio 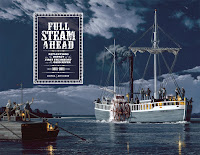 Full Steam Ahead: Reflections on the Impact of the First Steamboat on the Ohio River, 1811–2011, recently released by the IHS Press, celebrates the epic voyage of the steamboat New Orleans, which departed Pittsburgh, Pennsylvania, in October 1811. Onboard were Captain Nicholas Roosevelt, his crew, and his pregnant wife, their toddler, and a young maid. The New Orleans steamed to Louisville, Kentucky, and then back up to Cincinnati, Ohio, astounding the passengers it had taken onboard—for it was the first steamboat capable of traveling upriver as well as down.

The New Orleans’s voyage ushered in commerce, hastened immigration, and engendered town building within the Ohio–Mississippi River basin, transforming it from a raw frontier to an economic and social powerhouse.

Edited by Rita Kohn and published with the generous support of the Rivers Institue at Hanover College, Full Steam Ahead is a book of essays on the development of steamboats, Ohio River cities, and river transportation. Written for the general reader by individuals who have been engaged in a variety of river occupations, it is part of a larger project to explore ways the voyage of the New Orleans impacted the United States.

Kohn served as coordinator of the National Endowment for the Humanities-Six States Humanities Councils award-winning Always A River: The Ohio River and the American Experience (1986-1992). She is editor for the University Press of Kentucky Ohio River Series; her books have been published by Indiana University Press, Scarecrow, McFarland, Garland, and Children’s presses, among others. She is senior writer for NUVO Newsweekly.

The paperback book costs $19.95 and is available from the IHS History Market.
Posted by Indiana Historical Society Press at 11:23 AM 1 comment: