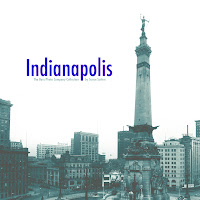 The Indiana Historical Society Press book Indianapolis: The Bass Photo Company Collection, written by Susan Sutton, has been named as one of three finalists in the 2009 Benjamin Franklin Awards competition in the Regional category. The awards are sponsored by the Independent Book Publishers Association.

Named in honor of America's most cherished publisher/printer, the Benjamin Franklin Awards recognizes excellence in independent publishing. Publications, grouped by genre are judged on editorial and design merit by top practitioners in each field.

Indianapolis: The Bass Photo Company Collection contains 183 photos selected from the vast Bass Photo Company Collection. The assorted images depict Indianapolis in good times and bad and provide a visual link to the city's past. Many of the images are so vivid that one can almost hear the clang of a trolley, the click of horse hooves, the roar of engines, and the din in the streets filled with bustling pedestrians. Included in the volume are nostalgic images of the Indianapolis 500 Mile Race, leisure activities, individual portraits, street scenes, Monument Circle, a parade of returning World War I soldiers, the Indianapolis Home Show, transportation, and architecture
Posted by Indiana Historical Society Press at 11:10 AM No comments: