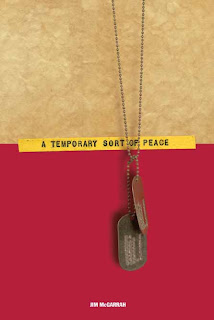 Growing up in Princeton, Indiana, during the 1950s, Jim McGarrah spent his days pursuing dreams of athletic glory on the baseball diamond, becoming captain of his high school’s baseball team and winning, for a time, the affections of a blond cheerleader, escorting her to dates at the local drive-in in his 1957 Chevrolet Bel Air. Although he earned a baseball scholarship to college, McGarrah flunked out of school in May 1967 and, on the way home, enlisted for service in the U.S. Marine Corps, causing his father, a veteran of World War II, to warn him he had no idea what he had just done.

In his new memoir A Temporary Sort of Peace, recently published by the Indiana Historical Society Press, McGarrah, today a poet and writer from southern Indiana, examines in detail his peacetime life in Indiana, his indoctrination into the cult of the marines as a fledgling warrior in basic training at Parris Island in South Carolina (“a small cog of the ‘lean green fighting machine,’” McGarrah notes in the book), and his introduction to the life of a combat soldier in Vietnam observing bulging body bags at an air base’s morgue in Da Nang and going to his first assignment armed with a malfunctioning M-16 rifle. Many years later, the former private first class, serial number 2371586, realized that for him, home had become “the jungles of Vietnam, the one place where life was at its best and worst simultaneously every minute of every day.”

The book also includes the author’s days with a small marine Combat Action Group trying to win the hearts and minds of Vietnamese in the village of Gia Le, his wounding by shrapnel from a rocket-propelled grenade during the height of the Tet Offensive, and dealing with his war memories back home in the United States. In August 2005, at the age of fifty-seven, McGarrah returned to Vietnam, visiting the sites of his former battles with his son and sharing memories of the past and future with a Vietnamese poet in a graceful peace ceremony in Hue.

McGarrah teaches creative writing at the University of Southern Indiana, where he is an assistant professor in the English department. He is the author of an award-winning poetry collection, Running the Voodoo Down; the novel, Going Postal; and served as co-editor with Tom Watson of the Indiana Historical Society Press collection Home Again: Essays and Memoirs from Indiana. McGarrah serves as poetry editor of Southern Indiana Review and is co-director of the RopeWalk Readers Series. 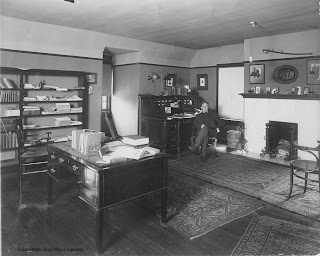 Ralph D. Gray is professor emeritus of history at Indiana University–Purdue University at Indianapolis and founding editor of the Journal of the Early Republic. He is the author of the new IHS Press biography Meredith Nicholson: A Writing Life. He recently answered a few questions about Nicholson.

What drew you to writing about Nicholson?
When I compiled a “reader” on Indiana history in 1979-80, I realized that only Meredith Nicholson, among Indiana’s Big Four writers, had no biography. So I looked into filling that gap. But when I started, I found another person, a Butler professor, also trying to fill the gap, but her work, eventually completed shortly before her death, has not been published. So Ray Boomhower gave me a second chance, more than 20 years later, to resume my Nicholson study and contribute to the Indiana Biography Series.

What’s the most interesting thing you learned during the writing of this book?
I suppose two things. First would be fascinating details about his personal life (both triumphs and tragedies--his father’s suicide, the loss of his first wife in 1931, after which no more novels were written, and much more) and the quality of his writings besides his novels--short stories, trenchant social and political commentary essays and good poetry.

What do you wish more people knew about Meredith Nicholson?
First of all, I’d like people to recognize Nicholson’s humor, sly and understated, but omnipresent. I also think his life story is fascinating, given his lack of formal education and a difficult home life, but he persevered and did outstanding work in at least four areas--as a newspaperman, a poet (an unlikely close friend, Riley, was his idol), a novelist and a diplomat. He was also a good businessman, but he disliked such work.

That flap copy for the book says “Nicholson stands as the most Hoosier of all Indiana writers, serving as an outspoken advocate for his state.” Give an example of what makes this true.
The totality of his writings--as I say somewhere, he never failed to boost all things Hoosier, and he repeatedly sprang to his state’s, and to his adopted city’s, defense if he detected a slight by someone.

What can we learn from Nicholson?
As he himself said in an autobiographical essay, “Without Benefit of College” (which could have been titled “Without Benefit of High School”), he was not bragging but wanted to assure parents concerned about their children’s lack of success in school, that there were other ways a person, if properly self-motivated and diligent, could make their way in society. Obviously, too, I hope people will think of Nicholson as a true, worthy member of the Big Four, not the one often forgotten in listing them all.
Posted by Indiana Historical Society Press at 7:55 AM No comments: 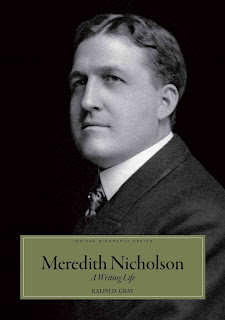 From 1880 to 1920, Indiana experienced a golden age of literature, with Hoosier authors achieving both national prominence and national acclaim. These writers provided readers with stories that emphasized traditional values and offered shelter from an ever-changing world.

Although those who lived in the state took an immense pride in what Indiana writers produced, they heaped special attention on four men, including the great Hoosier poet, James Whitcomb Riley; Pulitzer Prize–winning novelist Booth Tarkington; and noted newspaper columnist and humorist George Ade. The other member of this special group—Meredith Nicholson—also won enormous success with his novels. As Ralph D. Gray notes in this first-ever biography of the author and diplomat, Meredith Nicholson: A Writing Life, the fifth volume in the Indiana Historical Society Press’s Indiana Biography Series, Nicholson stands as the most Hoosier of all Indiana writers, serving as an outspoken advocate for his state. Indiana literary historian Arthur S. Shumaker called Nicholson the “most rabid” of Indiana’s major authors.

In addition to writing such national best sellers as Zelda Dameron and The House of a Thousand Candles, his best-known work, Nicholson won praise as an insightful essayist, with his work published in such national magazines as the Saturday Evening Post and Atlantic Monthly. “Nicholson’s enduring faith in ‘folks,’ the ordinary people of the Ohio and Mississippi valleys and the Midwest, his inherent belief in democracy and democratic values, and his unapologetic patriotism permeate his essays,” notes Gray, “some of which excoriated the Ku Klux Klan and upheld the rights and virtues of women, attitudes not always popular at the time.”

A longtime supporter of the Democratic Party, Nicholson’s loyalty to his party was rewarded in 1933 when President Franklin D. Roosevelt appointed him to be America’s top diplomat in war-torn Paraguay. Nicholson gave able service to the United States and went on to serve in two other Latin American countries before retiring from public life in 1941.

The book costs $19.95 and is available from the Society's Basile History Market. To order, call (800) 447-1830 or order online at the History Market.
Posted by Indiana Historical Society Press at 3:49 PM No comments:

At the Midwestern Roots Conference, co-sponsored by the Indiana Historical Society and the Indiana Genealogical Society in August 2005, a special session was held, "History and Genealogy–Why Not Both?"

Participants in the session included professional genealogists Elizabeth Shown Mills and Tony Burroughs, archival manager Curt B. Witcher, historians Marianne S. Wokeck and James H. Madison, and the session was introduced by historical editor M. Teresa Baer of the IHS Press. All participants are also published authors. Three of the participants, Mills, Witcher, and Baer, submitted papers based on the discussion to the Indiana Magazine of History, published by Indiana University. The editors of the IMH published all three papers on the periodical's Web site. The link to them is at the top, left side of the home page. The end of the introductory paper (Baer’s) includes a call for comments. The participants and the editors of the IMH welcome comments and hope the publication of these articles furthers the discussion and fosters closer ties between the scholarly pursuits of genealogy and history.
Posted by Indiana Historical Society Press at 7:53 AM 2 comments: