A Celebration of Indiana Fairs 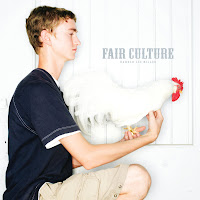 In August 2005 Harold Lee Miller, a nationally known photographer with offices in Indianapolis and New York, started a series of photographs of 4-H participants at the poultry and rabbit barns of the Indiana State Fair. Over the past few years, Miller expanded his project to include people and activity from fairs held in Jackson, Elkhart, Dubois, Delaware, Washington, Owen, Monroe, Knox, Jay, and Marion counties. The photographs in the new Indiana Historical Society Press book Fair Culture: Images from Indiana Fairs, depict people and their horses, sheep, cows, as well as life on the midway and other activities associated with this Hoosier summer pastime.

In addition to Miller’s more than one hundred photographs, the book includes an essay by Gerald Waite exploring the history of fairs from the Middle Ages to modern times, the growth of the institution in Indiana, and what fair culture says about those who participate in this annual ritual of midwestern life. The book also features an introduction by noted Indiana author Philip Gulley.

As Miller notes in the book's preface, “The people in these images are special, in the way that all people are special. . . . Part of what I’m trying to accomplish is to show just how interesting and uncommon each of these individuals really is, whether they know it or not. Each and every human photographed in this book is now part of our recorded American history, and in a hundred years that generation will see our unique presence in a way that we can’t see it now—marvel at our clothes, our faces, and our humanity, and thank us for letting ourselves be living artifacts of our time.”

Miller is a photographer and artist who works in film and with digital cameras. The son of an army officer who traveled the world, Miller has worked as a magazine managing editor in New York, a newspaper reporter, and for the past fifteen years as an advertising photographer. His work has appeared in national publications and advertising campaigns.

Waite is an instructor in the anthropology department at Ball State University, where he received his master’s degree in 1994. His research interests include Vietnam and refugee resettlement; white missionaries on the Navajo reservation; cultural boundaries, exclusion and inclusion; and Midwest settlement, county fairs, and festivals. Waite’s writing has appeared in the Indiana Historical Society’s popular history magazine Traces of Indiana and Midwestern History.

Fair Culture costs $24.95 and is available from the IHS's Basile History Market.
Posted by Indiana Historical Society Press at 9:38 AM 3 comments:

Edited by Jenny Kander and C. E. Greer, And Know This Place: Poetry of Indiana, features the work of 116 poets who live or who have lived in the state long enough to acquire a sense of the place. Recently released by the IHS Press, the book is the first collection of Indiana poetry to appear for more than a hundred years, with the last major anthology, Poets and Poetry of Indiana, published in 1900.

The list of poets in this volume include such notable figures from the past as James Whitcomb Riley, William Vaughn Moody, Jessayman West, and Marguerite Young, as well as such modern masters as Etheridge Knight, Mary Ellen Solt, Jared Carter, and Norbert Krapf. In addition, the book has a foreword, “An Extraordinary Legacy,” written by Roger Mitchell, former director of the creative writing program at Indiana University, where he held the Ruth Lilly Poetry Chair.

As Kander and Greer note in the book’s preface: “Our central criterion for selection was quality of the writing, and we chose those poems which cover the spectrum of experience in both place and time, in settings from city streets to wilderness tracks, covering the state from Goshen in the north to Floyd’s Knobs by the Ohio River, and from Gessie on the Illinois line to Cottage Grove a hundred and fifty miles east.”

Kander's poetry has appeared in Flying Island, California Quarterly, Bathtub Gin, Wind, Southern Indiana Review, and Shiver. Her chapbook Taboo was published by Finishing Line Press in 2004. She has compiled and edited two volumes of poetry, The Linen Weave of Bloomington Poets and Celebrating Seventy, both published under Wind’s logo.

Greer’s poems have appeared in Streets Magazine, Flying Island, Wind, and other publications. He has been active with the Bloomington Free Verse Poets, and he coedited, with Kander, Say This of Horses: A Selection of Poems published by the University of Iowa Press in 2007.

And Know This Place costs $24.94 and is available from the IHS's History Market.
Posted by Indiana Historical Society Press at 12:20 PM No comments: