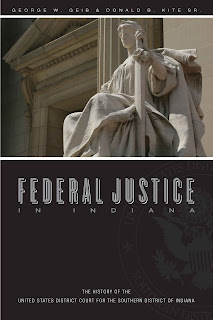 Since Indiana’s inception as a territory under the Northwest Ordinance, the federal courts held here over the last two centuries have played an important and distinguished role in both local and national legal history. This significance is vividly represented in Federal Justice in Indiana: The History of the United States District Court for the Southern District of Indiana. From its earliest days as a territorial court to the District Court’s current composition, the people and places central to the conduct of the court’s business are placed into the wider context of Indiana and American history.

Authors George W. Geib and Donald B. Kite Sr. provide the reader with an understanding of both the organizational structure of the court as well as glimpses into the cases, both great and small, which have come before it. The discussions on the court’s structure allows for insight into the selection and appointment of judges, contextualizes the constitutional basis of the court’s authority, and makes the politics and administration of federal justice in Indiana comprehensible.

The variety of cases that Geib and Kite include in the text illustrates the evolution of the court. More importantly, these cases lend a sense of humanity to the court, as those individuals involved with the trials and hearings are brought out of the shadows of legal history to stand as witnesses to the court’s past. From the famous Ex parte Milligan case to the modern court’s rulings on religion, pornography, and civil rights, the significance and influence of the federal judiciary in Indiana is clarified.

Federal Justice in Indiana is an important addition to the growing collection of books on American legal history and a valuable resource to those interested in Indiana history. With its balanced handling of legal, social, and political issues, this book will appeal to attorneys and non-attorneys alike.
Posted by Indiana Historical Society Press at 2:28 PM