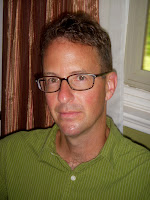 Chairman of the Department of History and Political Science at Anderson University, David Thomas Murphy teaches courses in Western Civilization, Modern German history, the history of modern Europe, and the history of the Holocaust and comparative genocides. Murphy tackles a different subject in his new book Murder in Their Hearts: The Fall Creek Massacre. In the following interview he explains how he came to write about this tragic incident in Indiana's pioneer past.

How did you get interested in writing about the Fall Creek Massacre?

Through my work as a teacher of history here at Anderson University. One of the courses I teach regularly is called "Historical Inquiry", and it's designed to get our advanced history majors working on topics that use primary research materials. One of the most accessible ways to do that, in my experience, is to have students complete either a genealogical or local history project, and I always require that. A few years ago, one of my students in the course who came from the Pendleton area did his project on the Fall Creek Massacre.

I am originally from northern Illinois, and had never heard of the Massacre. The paper really intrigued me, and when I looked for more information on the episode, I didn't find much. There was Jessamyn West's novel, and there were a few articles, but no archivally-based, book-length study. And that was the beginning of the project. (And, yes, I do thank that student in the preface.)

In doing your research, did anything surprise you about the event?

A couple of things surprised me. One was the variety and complexity of the attitudes held toward Native Americans by the settlers of the early white Indiana community. There were of course a few truly racist Indian haters, and that didn't surprise me so much. But I have come to believe that such unalloyed hostility was anything but the norm. Most of the whites, so far as their feelings are today discernible, seem to have regarded their native neighbors with mingled respect, fear, suspicion, tolerance and at times sympathy for a people whom many believed had been treated cruelly by fate. John Johnston, the Indian agent in the area, for example, had a deep respect for the nobility of character he believed he saw in many of his charges, while never romanticizing them or ignoring their sometimes fearsome cruelty in battle.

I was also surprised by the sophistication of the land speculation business on the frontier. Every settler of any means was deeply committed to the steady appreciation of land values--investment in land was the stock market of that time and place - and the steps taken to exploit (and manipulate) that generator of wealth seemed like they could have been taken from the headlines of the last few years.

The unreliable nature of frontier record-keeping took some getting used to as well. I have done two previous books on aspects of modern German history, so I know that error creeps into the official record at times. But I still found in early county records a casual disregard for getting basic facts straight that surprised me.

How hard was it to reconcile the conflicting accounts of the event?

Sometimes it was not hard at all. For example, it was pretty easy to use contemporary newspaper accounts, which were carefully dated, of course, to figure what dates in the transcripts were accurate and which had to be incorrect.

Other times it was very difficult, and could finally be resolved only by making judgments about what seemed most plausible. A dozen conflicting accounts of the tribal origins of the victims of the Massacre are out there, and sometimes the same witness will identify them as of one tribal group at one time and as of a different group later. So, I had to take the results of modern anthropological research about who was most likely to have been here in numbers at the time, consider that with the testimony of the earliest and most knowledgeable sources, and try to decide where the truth seemed most probably to lie. I believe I came up with a defensible and plausible solution, but there is no way to say, categorically, that my view on this, or some similar matters, is the right one.

Were there books or authors that you drew upon for inspiration as you wrote your book?

While I was working on this book, Larry McMurtry, whose writings I admire, published a book called "O, What a Slaughter", about interracial violence in the Old West. That book gave me some ideas about how a person might present such events in a way that was historically accurate, and appealing to readers who, while not experts, are discriminating, perceptive and educated. I relied a lot upon the Indiana histories of Barnhart and Carmony, upon James Madison's Indiana Way, and Drew Cayton's Frontier Indiana. And I think anyone interested in writing regional history that is accurate, sophisticated, and written with verve can do a lot worse than consider John Bartlow Martin's Indiana: An Interpretation.

I am working on two books now. One is a study of Jewish and Catholic interfaith relations in the West over the last two centuries. It is really just in the beginning stages, and relates to some earlier research I have done in German history. The other is a book about literature and education tentatively entitled "The Twenty-First Century Mind-Diet." We'll see what happens with that.
Posted by Indiana Historical Society Press at 1:27 PM