The IHS Press youth biography The Soldier's Friend: A Life of Ernie Pyle has been named as one of three finalists in the 2007 Benjamin Franklin Awards competition. The book is a finalist in the Juvenile, Young Adult Nonfiction, category.

Sponsored by the Publishers Marketing Association, an independent book publishers association, the Benjamin Franklin Awards recognizes excellence in independent publishing. Publications, grouped by genre are judged on editorial and design merit by top practitioners in each field. The trophies are awarded to the best books in several categories and are presented to the publishers during a gala awards ceremony on the last evening of the Publishing University (just before the opening of Book Expo America).

Written by Ray E. Boomhower, The Soldier's Friend: A Lifer of Ernie Pyle explores the reporter’s legendary career from his days growing up in the small town of Dana, Indiana, to his life as a roving correspondent with the Scripps-Howard newspaper chain, to his growing fame as a columnist detailing the rigors of combat faced by the average G.I. during World War II. The book also features numerous illustrations, samples of Pyle’s World War II columns, a detailed bibliography of World War II sources, and an index.
Posted by Indiana Historical Society Press at 9:45 AM No comments: 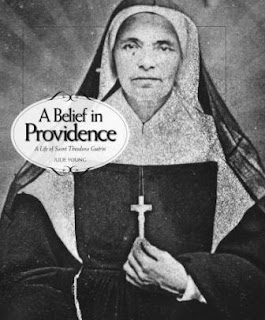 The Indiana Historical Society Press is proud to announce the release of its newest youth biography title, A Belief in Providence: A Life of Saint Theodora Guérin. The book explores the life and legacy of the woman who would become Indiana’s first saint.

Written by Julie Young, A Belief in Providence follows the life of Saint Theodora Guérin (born Anne-Thérèse Guérin in 1798) from her childhood and formative, faith-building years in France to her answer of the call to found a religious establishment near Terre Haute, Indiana. It also details her work as a religious and educational pioneer on the Indiana frontier.

Despite poor health, primitive frontier conditions, and dealings with a contentious archbishop (who at one point locked her in a room in the rectory), Mother Theodore Guérin founded Saint Mary-of-the-Woods College, the oldest Catholic women’s liberal arts college in the United States, and opened schools in Jasper, Madison and Vincennes, Indiana, often facing suspicion and hostility from the local population.

The book also examines the process leading to Guérin’s canonization, from the beginning of the official Cause for her sainthood in 1909 to the culmination of this century-long effort on Oct. 15, 2006.

Young is a freelance writer and adjunct faculty at Indiana University-Purdue University at Indianapolis, teaching creative writing and freelance writing through its community learning network. A graduate of Saint Mary-of-the-Woods College with a degree in professional writing, her work has been seen in various publications, including Indianapolis Woman, Evansville Living and AAA Home and Away magazines as well as CNN.com. She has also worked for the Associated Press, the Herald Weekly newspaper and Scecina Memorial High School in Indianapolis.

The books costs $17.95 and is available from the Society's Basile History Market. To order, call (800) 447-1830 or order online at the History Market.
Posted by Indiana Historical Society Press at 9:24 AM No comments: