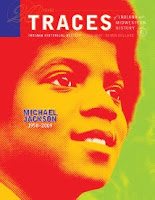 The fall 2009 issue of the Indiana Historical Society Press's popular history magazine Traces of Indiana and Midwestern History will be in members' mailboxes soon.

In addition, the issue includes articles on the history of Shapiro's Deli in Indianapolis; the fiftieth anniversary of the film Ben-Hur, based upon the best-selling book by Hoosier author and general Lew Wallace; a look back at how Indianapolis reacted to the great railroad strike of 1877; and a piece on the African American Townsend family of Putnam County, Indiana.

Traces is an award-winning popular history magazine published quarterly as a benefit of membership in the IHS. Conceived as a means of bringing to the public good narrative and analytical history about Indiana in its broader contexts of region and nation, the magazine since 1989 has explored the lives of artists, writers, politicians, performers, soldiers, entrepreneurs, homemakers, reformers, and naturalists.
Posted by Indiana Historical Society Press at 1:29 PM 2 comments: