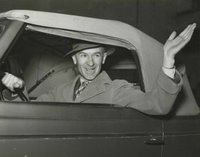 Ray E. Boomhower, managing editor of the Indiana Historical Society's popular history magazine Traces of Indiana and Midwestern History, is the author of a new youth biography on Ernie Pyle published by the IHS Press. He answered a few questions about writing the book for the Press's blog.

Before starting the project, how much did you know about Pyle's life?

Ernie Pyle has been a part of my life since my college days at Indiana University in Bloomington. I majored in jouralism at IU and spent much of my time in Ernie Pyle Hall, going to classes and, as Ernie did, working on the student newspaper, the Indiana Daily Student. There was something this small, quite man that drew my attention from the first. I marvled at how a kid from small-town Indiana could become so famous and admired him for his devotion to the ordinary GI during World War II.

In doing research on Pyle's life, did you find anything that surprised you?

I knew that Pyle had been a household name in America because of his work during the war, but I was unaware of how popular he had been before World War II. His "Hoosier Vagabond" column for the Scripps-Howard chain reached a wide readership and proved to be one of the most popular features for countless newspapers across the country.

I also did not realize how well Pyle wrote. Like other journalists, he faced enormous deadlines pressures in writing a syndicated column, especially because of his constant traveling. Despite this, he produced quality pieces that stand the test of time.

This is the second youth biography you've written for the Press. [Boomhower also wrote a children's biography of Lew Wallace for the Press.] Do you enjoy writing for a young audience?

It's been a pleasure to research and write these biographies. I've discovered that there's not much difference in writing for young people as compared to writing for an adult audience. Both audiences seem to desire concise biographies of famous Hoosiers that explore the key points of a subject's life. I've also enjoyed ferreting out illustrations for both books in repositories around the state and working with the staff at historic sites devoted to the lives of Wallace and Pyle. They've been a great help in making these books possible.
Posted by Indiana Historical Society Press at 9:27 AM No comments:


What prompted the editors at Indy Men’s Magazine to do a collection of essays with a Christmas theme?

Indy Men’s Magazine is very much an essay driven publication. What sets the magazine apart from many city and regional publications is that we not only encourage first person writing, it’s more or less the foundation of the magazine. Awhile back we ran a feature called “Father Christmas” in which three of our writers grappled with ghosts from their holidays past. It was well received by our readers and it got us thinking about how an expanded version of that theme--with all of our A-list writers contributing--could make for a really interesting book.

How did you go about recruiting authors for the collection?

We’re fortunate to have a core group of very talented writers who contribute to the magazine on a regular basis. When it came time to recruit authors for this collection we simply asked the writers whose talents we admire the most if they had a holiday story they wanted to tell. We’ve got some real heavy hitters contributing to these pages. Michael Kun was a Pulitzer Prize nominee. Tom Chiarella was a finalist for the National Magazine Award. Phillip Gulley is a best-selling author. Almost without exception all of the writers contributing to The X-Mas Men have authored at least one book.

Do you have a favorite of the essays in the book?

At the risk of sounding like a proud parent I have several favorites that I love for different reasons. I think the book’s real strength is that while each of the essays are distinct in terms of style and subject matter, collectively they create a real universal and cohesive picture of the holidays. Although in a lot of ways, this is more than simply a book about “Christmas.” In a lot of ways it’s a book about family.

What is your most memorable holiday memory?

The essay I contributed deals with a pretty memorable experience. A couple of years ago my daughter, who was four at the time, became really curious about the concept death and the after life. Her curiosity kind of dovetailed with the holiday season. So on Christmas Eve that year I took her to her grandmother’s grave as a way of trying her answer some of her questions. It was an odd way to be spending the early part of Christmas Eve I suppose but it had a big impact on both of us.

Any plans on doing other theme-related books?

Absolutely. We’ve got a got a couple of ideas we’re excited about. We see The X-mas Men as the first in a series of wildly successful books from the writers of IMM.
Posted by Indiana Historical Society Press at 2:04 PM No comments: 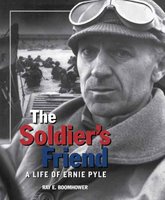 To the millions of Americans on the home front during World War II, Ernie Pyle’s column in newspapers across the country offered a foxhole view of the struggle as he reported on the life and death of the average soldier. When he died, Pyle’s popularity and readership was worldwide, with his column appearing in 400 daily and 300 weekly newspapers.

Written by award-winning author and historian Ray E. Boomhower, The Soldier’s Friend: A Life of Ernie Pyle, a biography aimed at young readers, explores the reporter’s legendary career from his days growing up in the small town of Dana, Indiana, to his life as a roving correspondent with the Scripps-Howard newspaper chain, to his growing fame as a columnist detailing the rigors of combat faced by the average G.I. during World War II. The book also features numerous illustrations, samples of Pyle’s World War II columns, a detailed bibliography of World War II sources, and an index.

Pyle offered for his readers a “worm’s-eye view” of the war as he reported on the life, and sometimes death, of the common soldier doing the dirty work of fighting in North Africa, Sicily, Italy, and France against the enemy forces of Nazi Germany.

For his distinguished reporting during the war, Pyle received journalism’s highest honor—the Pulitzer Prize—in 1944. Books of his columns were best sellers, and one of his most famous stories, describing the death of an officer named Captain Henry T. Waskow, was made into a movie, The Story of G.I. Joe, starring Burgess Meredith and Robert Mitchum.

John Steinbeck, a best-selling novelist and Pyle’s friend, perhaps best described the reporter’s work when he told Time magazine that there were two wars and neither had much to do with one another. There was the one war that involved maps and the movements of armies, divisions, and regiments run by high-ranking officers such as General George Marshall, chief of staff of the U.S. Army in Washington, D.C.

But there was another war, Steinbeck said. This war involved the “homesick, weary, funny, violent common men who wash their socks in their helmets, complain about the food . . . and bring themselves through as dirty a business as the world has ever seen and do it with humor and dignity and courage—and that is Ernie Pyle’s war. He knows it as well as anyone and writes about it better than anyone.”

The Soldier's Friend: A Life of Ernie Pyle costs $17.95 and is available at the Society's Basile History Market gift shop. To order, call (800) 447-1830 or order online at the History Market.
Posted by Indiana Historical Society Press at 2:01 PM No comments:

Co-edited by Lou Harry and Todd Tobias, The X-Mas Men explores each author’s view of Christmas as a day charged with laughter and beauty, hope and regret—despite the difference in their religious, familial and economic backgrounds. Beyond the parties, television specials, shopping, gift exchanges, sermons and prayers, the book explores how Christmas has a way of shedding a twinkling light on people’s lives like no other day of the year.

Lou Harry is editor in chief of Indy Men’s Magazine. He has written or co-written more than twenty books, including The High-Impact Infidelity Diet: A Novel, Creative Block, and Dirty Words of Wisdom. Todd Tobias is publisher of Indy Men’s Magazine and coauthor of Put the Moose on the Table.