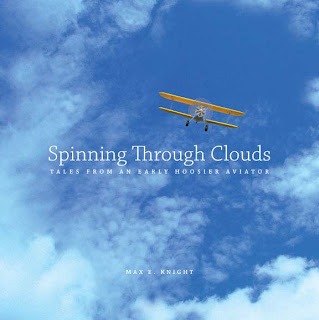 Aviation pioneers of the 1930s flew by the seat of their pants. Donning leather helmets and fur-lined goggles, these adventurous men and women climbed into open cockpits to battle the elements, sitting in narrow, flimsy cabins. Early pilots flew by feelings—not instruments or radios. Flying new planes as quickly as they were crafted, early pilots repeatedly broke speed, distance, and endurance records, flying the jet age into being.

The Indiana Historical Society Press is proud to announce the release of Spinning Through Clouds: Tales from an Early Hoosier Aviator. Written by Max E. Knight, the book recounts his days as a young pilot and adventurer while providing national context to the history of aviation.

Growing up in Lynn, Indiana, Knight began flying in 1936 at the age of 10. At his father’s airport there, he met many of the state’s aviation pioneers, learning to fly from some of them. He flew in early planes, from Piper Cubs to the Tin Goose (the first transcontinental passenger plane).

Knight tells about his early flying adventures in Spinning Through Clouds: Tales from an Early Hoosier Aviator. Suitable for young adults and adults, the book also tells stories from the early period of national aviation, introducing air racing champions such as Roscoe Turner and Jacqueline Cochran alongside better-known pilots such as Amelia Earhart and Howard Hughes.

The paperback book costs $19.95 is available from the Society's Basile History Market. To order, call (800) 447-1830 or order online at the History Market.
Posted by Indiana Historical Society Press at 3:19 PM 1 comment: