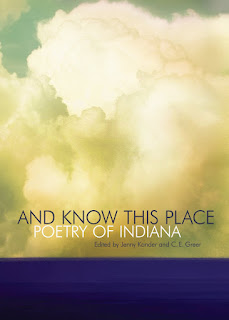 The IHS Press book And Know This Place: Poetry of Indiana, has won the poetry category in the Indiana Center for the Book's 2012 Best Books of Indiana competition.

The poetry category judges called the book "an encapsulation of an essential part of our state's literary history," and noted it was "deserving of a place of honor in the personal library of any lover of things either poetic or Hoosier. As a resource for a connoisseur or novice, it would be well placed on a bookshelf next to Czeslaw Milosz's A Book of Luminous Things and Garrison Keillor's Good Poems."
Finalists in the poetry category included Airmail from the Airpoets and Rob Griffith's book The Moon from Every Window.

Kander's poetry has appeared in Flying Island, California Quarterly, Bathtub Gin,Wind, Southern Indiana Review, and Shiver. Her chapbook Taboo was published by Finishing Line Press in 2004. She has compiled and edited two volumes of poetry, The Linen Weave of Bloomington Poets and Celebrating Seventy, both published under Wind’s logo. Greer’s poems have appeared in Streets Magazine, Flying Island, Wind, and other publications. He has been active with the Bloomington Free Verse Poets, and he coedited, with Kander, Say This of Horses: A Selection of Poems published by the University of Iowa Press in 2007.
Posted by Indiana Historical Society Press at 8:36 AM 1 comment:

Kenneth L. Turchi developed an interest in retailing while working for a clothing store in his hometown of Crawfordsville, Indiana. He worked for L. S. Ayres and Company while in college and later earned a law degree. He has spent most of his career in marketing and strategic planning in the financial services industry. Currently Turchi is assistant dean at the Indiana University Maurer School of Law in Bloomington. Here he answers questions about his new book for the IHS Press, L. S. Ayres and Company: The Store at the Crossroads of America.

What inspired you to write a history of L.S. Ayres and Company?

I've always been interested in retailing. My first job in high school was as an errand runner at The Golden Rule, a small chain of now-defunct women's clothing stores in my hometown of Crawfordsville. Later I worked for Loeb's of Lafayette and for L. S. Ayres. Researching and writing this book was a way for me to explore an area of interest in depth and meet some great people. It was an easy topic to choose: Ayres enjoyed such respect for its integrity, both as a merchant as an employer.

What made Ayres different from other department stores?

At least two things: Ayres was among the first department stores to anticipate the shift from dressmaking to ready-to-wear after World War I. To help customers make that transition, they came up with "That Ayres Look"--a slogan that signaled to its customers that ready-made fashions were just as desirable as custom-made ones, regardless of price. The slogan served them well for more than fifty years and set the pace for the store's commitment to quality, from the designer salon to the downstairs store.

Second, Ayres saw itself as being in the merchandising business, not the department store business. This broad strategy took them into new lines of business: discount stores, trade sources, specialty stores, all of which anticipated market trends years in advance. I believe that if the company hadn't made a couple of strategic errors in the early 1970s (and the economy had cooperated), they would occupy the space now owned by Target Corporation, which followed a similar growth path to Ayres. (Target was the discount-store arm of Dayton's, a Minneapolis department store similar to Ayres.)
Is there one individual from Ayres that stood out to you while you were doing your research as a person who typified the best of Ayres?

I would name two: Ted Griffith, who married into the Ayres family and guided its growth from the 1920s until about 1960. He was a master merchandiser and by all accounts an exemplary leader. Jim Gloin also comes to mind: he was the store's numbers man who kept things going during World War II and set the stage for its growth and diversification in the 1960s. Other names come to mind, too: Dan Evans, John Peacock, and Elizabeth Patrick.

Looking back, was there a way for Ayres to have survived into the twenty-first century?

As mentioned, Ayres made a critical decision in the late 1960s to continue building its department store franchise, which impeded growth of its Ayr-Way discount stores. If they had cast their lot with discount and specialty retailing, we quite probably would all be shopping at Ayr-Way rather than Target, and at Sycamore Shops rather than The Limited.

But other than that, Ayres as a traditional department store, where you could spend the day browsing for everything from furniture to sheet music to sewing notions to typewriters, could not survive today. Shopping habits have changed, and customers aren't as willing to pay for service over price. A few specialty retailers--Nordstrom, Crate and Barrel--have taken over the high-end general merchandise market. Macy's does a good job as a department store, but not in the traditional sense, and its results depend heavily on promotional pricing.

Are you working on another book?

Posted by Indiana Historical Society Press at 8:23 AM 4 comments: 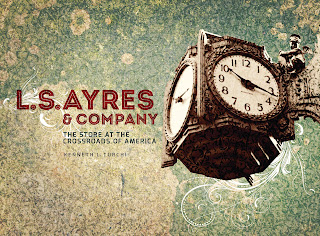 In 1872 Lyman Ayres acquired a controlling interest in the Trade Palace, a dry-goods store in Indianapolis. Two ears later, he bought out his partners and renamed the establishment L. S. Ayres and Company. For the next century, Ayres was as much a part of Indianapolis as Monument Circle or the Indianapolis 500. Generations of midwestern families visited the vast store to shop for everything from furs to television sets, to see the animated Christmas windows, and, of course, to visit Santa Claus and enjoy lunch in the Tea Room.

As Kenneth L. Turchi highlights in his new IHS Press book L. S. Ayres and Company: The Store at the Crossroads of America, Ayres was more than just a department store. At its helm across three generations was a team of visionary retailers who took the store from its early silk-and-calico days to a diversified company with interests in specialty stores, discount stores (before Target and Wal-Mart), and even grocery stores. At the same time, Ayres never lost sight of its commitment to women's fashion that gave the store the same cachet as its largest competitors in New York and Chicago.

What was the secret of Ayres's success? In the book, Turchi traces the store's history through three wars, the Great Depression, and the changing tastes and shopping habits of America in the 1960s and 1970s. Examining Ayres's hundred years of management decisions, he offers strategic takeaways that explain not only the store's success, but that also apply to anyone who wants to be successful in business. Along the way, he describes the store's phenomenal growth while offering a behind-the-scenes look at this beloved and trusted institution.

Turchi developed an interest in retailing while working for a clothing store in his hometown of Crawfordsville, Indiana. He worked for L. S. Ayres and Company while in college and later earned a law degree. He has spent most of his career in marketing and strategic planning in the financial services industry. Currently Turchi is assistant dean at the Indiana University Maurer School of Law in Bloomington. This is his first book.

L. S. Ayres and Company: The Store at the Crossroads of America costs $29.95 and is available from the IHS's Basile History Market.
Posted by Indiana Historical Society Press at 8:27 AM No comments: