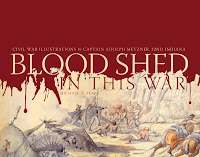 Peake's book depicts Metzner's world during his three years of service with the First German, Thirty-second Regiment Indiana Volunteer Infantry campaigning in the Western Theater during the Civil War. Metzner chronicled the day-to-day life of a soldier’s world, at first with humor, and later, with a stark reality of life and death on the battlefield.

A resident of Corydon, Indiana, Peake is an author and historian specializing in Indiana German genealogy and history as related to the American Civil War. Since retiring from federal service in 1996, Peake has devoted his time to researching Union and Confederate German-American military organizations.

Blood Shed in This War costs $34.95 and is available from the IHS's History Market.
Posted by Indiana Historical Society Press at 8:37 AM No comments:

The IHS Press book Indiana: One Pint at a Time by Douglas A. Wissing is a finalist in the regional category of the Independent Book Publishers Association’s annual Benjamin Franklin Awards.

Named in honor of America's most cherished publisher/printer, the Benjamin Franklin Awards recognizes excellence in independent publishing. Publications, grouped by genre are judged on editorial and design merit by top practitioners in each field. The trophies are awarded to the best books in several categories and are presented to the publishers during a gala awards ceremony on the last evening of the Publishing University (just before the opening of Book Expo America).

The other finalists in the regional category are: California Home Landscaping (Creative Homeowner) and A Passion for Tarpon (Wild River Press).

The Benjamin Franklin 2011 Awards presentation ceremony will be held at the Jacob Javits Center, New York, on May 24, 2010.
Posted by Indiana Historical Society Press at 9:33 AM 1 comment: