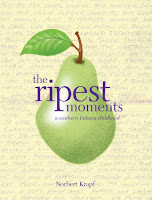 In the 1840s and 1850s, thousands of German families left Europe for a new life in America. Hundreds of these immigrants eventually settled in the Dubois County community of Jasper, Indiana, the county seat. Surrounding the town were dense hardwood forests that provided the raw materials for craftsmen to begin the furniture-making firms for which the area became well known. Two of the German families that put down roots in the Jasper area, the Schmitts and the Krapfs, produced a son who today remembers those days of close ties to family and the land.

The Ripest Moments: A Southern Indiana Childhood is a memoir by noted Indiana poet and essayist Norbert Krapf of his childhood and growing up in Jasper. In the book Krapf, who was born in 1943 and whose poetry has been nominated for a Pulitzer Prize, recalls his rural, small-town upbringing in the German-Catholic community and unearths the distinctive place and culture in which he lived. As Krapf observes, “Behind this book and my collections of poetry is a conviction that an awareness of individual and collective origins can enlighten, nourish, guide, and sustain us and those who come after us.”

Krapf’s writing evokes a time when Hoosiers lived closer to the land, connecting with nature through such everyday activities as playing hide-and-seek with cousins in an old barn, trundling down the road as a child to catch a glimpse of fields being harvested, and going camping, hunting, and fishing. The author also captures the joy of playing and watching sports and shows how a community can come together through rituals passed down from one generation to the next, such as the custom of children pulling homemade Labor Day boxes in an annual parade. Beneath the surface, however, lies the sadness of having a stillborn sister and seeing his father suffer from depression. “I have always believed that any story set deeply in one time and place, if told well, speaks for other times, places, and people,” Krapf notes. “To put it another way, a sense of time and place travels and settles well.”

Krapf received his bachelor’s degree from Saint Joseph’s College. He took his master’s degree and doctorate in English from the University of Notre Dame and taught English at the C.W. Post Campus of Long Island University for thirty-four years. In 2004 he moved with his family to Indianapolis, where he completed The Ripest Moments.

His seven poetry collections, in which his Indiana German heritage is central, include Somewhere in Southern Indiana, The Country I Come From, nominated for the Pulitzer Prize, and the retrospective collection Bloodroot: Indiana Poems. He is also the editor of Finding the Grain, a collection of pioneer German journals and letters from Dubois County, and the editor/translator of a book of legends set in his ancestral Franconia, Beneath the Cherry Sapling.

The Ripest Moments costs $15.95. The hardback book is available from the Society's Basile History Market. To order, call (800) 447-1830 or order online at the History Market.
Posted by Indiana Historical Society Press at 8:43 AM No comments:

The Indiana Historical Society Press publication The Soldier's Friend: A Life of Ernie Pyle, written by Ray E. Boomhower, won second place in the book category at the Indiana Professional Chapter of the Society of Professional Journalists' annual Best in Indiana journalism contest Friday, April 25. The winners were honored for their work in 2007 at the Indianapolis Marriott North Hotel.