Rachel Berenson Perry is the former fines arts curator at the Indiana State Museum. In addition to organizaing art exhibitions at the ISM, she is the author of numerous articles for such publications as the American Art Review, Traces of Indiana and Midwestern History, Outdoor Indiana, and Southwest Art Magazine. Her new IHS Press book Paint and Canvas: A Life of T.C. Steele, examines the career of the famous Hoosier Group artist. Here she answers some questions about her own life and what drew her to write about Steele.

Like almost any child, I used to draw. I took studio drawing classes while in high school and created various occasional art projects after going out into the world. My interest in art and art history was rekindled when I began to work at the T.C. Steele State Historic Site in 1985.

Had you heard of or known about T.C. Steele before you started work at the House of the Singing Winds in Brown County?

Yes. I visited Steele's Brown County home and studio in the 1960s, before it became more regularly open to the public.

Can you remember the oddest or strangest question you received from a visitor during your time at the historic site?

An illustration of how some people take for granted that the world has always been what they now know is a question one young man asked when I was giving a tour of Steele's studio. He looked at the paintings and asked why Steele had never painted the Monroe Reservoir (which was built in the early 1960s; Steele died in 1926).

In your opinion, just how good an artist was Steele?

There are a myriad of good artists historically and today. Steele was one of the first artists to study abroad, and then return to Indiana to paint our state's subtle landscape. Some say that, if he'd re-located to New York (as did William Merritt Chase), he would have become more nationally known and made a better living. I think some of Steele's best landscapes are as good as any American impressionist painter's.

In doing your research on Steele’s life, did anything you find surprise you?

I think the thing that surprises most people today is how difficult it was for Steele to make ends meet financially. They think that, because his paintings sell for several thousand dollars today, he must have been a rich man.

During my research, the thing that most surprised and delighted me was finding Steele's inked palm prints that were made when he had his fortune told by Nellie Simmons Meier in Indianapolis.

Do you have a favorite Steele painting?

Im drawn to some of the landscapes that he painted in Munich, and one of my favorites is The Birches, a small painting of many vertical tree trunks in muted grays and browns. 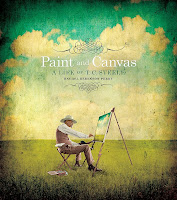 At the age of fourteen, a young man in Waveland, Indiana, had taken over the family farm after the death of his father. Now responsible for taking care of his widowed motehr and supporting his four brothers, he took up the reins on the plow to begin preparing the field for planting.

Family legend has it that the young farmer, Theodore Clement Steele, tied "colored ribbons to the handles of the plow so that he could watch the ribbons in the wind and the effect they had on the [surrounding] colors." Recognizing Steele's passion for art, his mother supported his choice to make his living as an artist.

Written by author and art historian Rachel Berenson Perry, Paint and Canvas: A Life of T.C. Steele, the eighth volume in the Indiana Historical Society Press's youth biography series, traces the path of Steele's career as an artist from his early studies in Germany to his determination to paint what he knew best, the Indiana landscape. Steele, along with fellow artists William Forsyth, Otto Stark, Richard Gruelle, and J. Ottis Adams, became a member of the renowned Hoosier Group and became a leader in the development of midwestern art. In addition to creating artwork, Steele wrote and gave lectures, served on numerous art juries to select paintings and prizes for national and international exhibitions, and helped organize pioneering art associations and societies.

Though know today primarily for his landscapes, Steele was an accomplished and sought after portrait artist. By the time of his death, he had painted many of Indiana's most prominent citizens, including President Benjamin Harrison, Vice President Charles Fairbanks, Colonel Eli Lilly, James Whitcomb Riley, Catherine Merrill, William Lowe Bryan, and Lyman S. Ayres, among others.

In 1907 Steele and his second wife, Selma Neubacher, moved to Brown County, where they built their home, dubbed the House of the Singing Winds for the aural treats produced as the wind blew through the wires of the screened porches surrounding the house. From 1907 to 1921 the Steeles spent the spring season at their Brown County property and wintered in Indianapolis. In 1922 Steele became artist in residence and an honorary professor at Indiana University.

While working on a painting of a peony arrangement at his Brown County home in May 1926, Steele fell seriously ill. After a trip to a clinic in Terre Haute failed to offer any relief, the Steeles returned to their home on the hill on the Fourth of July. The painted died at eight o'clock in the evening on July 24, 1926. For comfort, Selma recalled something her husband had once said to her during a time of sorrow: "Don't you know there are some things one cannot reason out?"

Perry is the former fines arts curator at the Indiana State Museum. In addition to organizaing art exhibitions at the ISM, she is the author of numerous articles for such publications as the American Art Review, Traces of Indiana and Midwestern History, Outdoor Indiana, and Southwest Art Magazine. Her books include Children from the Hills: The Life and Work of Ada Walter Schulz (1998) and T.C. Steele and the Society of Western Artists, 1896-1914 (2009).

Paint and Canvas is a hardback book and costs $17.95. The book is available from the IHS's Basile History Market.
Posted by Indiana Historical Society Press at 3:12 PM No comments: