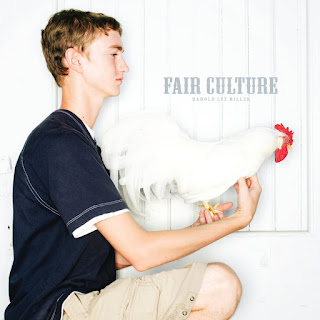 As official Artist in Residence of the Indiana State Fair, award-winning photographer Harold Lee Miller’s images will be on public exhibit throughout the fair, from 1 p.m. to 9 p.m. August 3-19 in the Normandy Barn. The photos are from Miller’s recent IHS Press book Fair Culture: Images from Indiana Fairs.

Miller, an Indianapolis-based fine art and advertising photographer, will host an open house from 6 p.m. to 9 p.m. Saturday, August 4, at the exhibit, during which he will sign copies of the book.

Miller started working on a project to document the culture of Indiana fairs in August 2005 with a series of photographs of 4-H participants at the state fair Poultry and Rabbit Barn. Over the next few years he photographed county fairs throughout Indiana. In addition to the photographs, the book includes an essay by Gerald Waite, anthropologist and Ball State University instructor, that explores the history of fairs from the Middle Ages to modern times.

“I thought I was documenting a declining culture,” Miller said, “but I discovered it wasn’t declining at all. Indiana’s fairs are very healthy, and they offer us a fascinating look at who we are and where we come from.

“I wanted to present the people who are part of this culture as their own sort of personal exhibit, focusing on them in a documentational style that doesn’t romanticize, but records their dignity and humanity in a way we don’t often contemplate. Each photograph contains a deep archive of their personality and their time in history.”

Images from Miller’s book illustrate the Indiana State Fair’s website and are featured in the fair’s 2012 advertisements and commercials.

Miller will close his artist-in-residency with an exhibit from 6 p.m. to 10 p.m. Sept. 7 at his downtown studio, 646 Virginia Ave.

Copies of the book are available through the IHS Basile History Market.
Posted by Indiana Historical Society Press at 8:08 AM 4 comments: 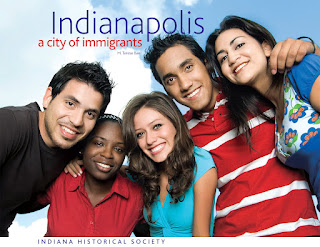 Indianapolis: A City of Immigrants, now available from the IHS Press, tells the story of people from around the world who chose Indiana’s capital for their home.

Written by M. Teresa Baer, IHS Press managing editor of family history publications, the booklet opens with the Delaware Indians who lived in the area until they moved west in 1818. White Protestants whose ancestors hailed from England, Wales, Scotland, and northern Ireland quickly replaced the natives and were followed by poor Irish Catholics, who came to build canals and railroads. Numerous Germanic people arrived during the mid-nineteenth century, including Protestants, Catholics, and Jews. African American indentured servants and free blacks also helped to create and develop Indianapolis. After the Civil War, southern blacks poured into the city.

At the end of the nineteenth century, thousands of eastern and southern Europeans, fleeing war and political unrest, also landed in Indianapolis. American anti-immigration laws slowed immigration until World War II. From that point, Indianapolis welcomed students and professionals from Asia and the Middle East, bringing religions such as Buddhism, Islam, Sikhism, and Hinduism to the city. It also became a refuge for immigrants from war-torn countries such as Vietnam and poor countries such as Mexico. Today, the city’s Hispanic, Indian, and Asian populations are growing rapidly. Together with the older established groups and incoming Americans—including numerous Native Americans—Indianapolis is more diverse and culturally rich than ever before.

Baer publishes The Hoosier Genealogist: Connections magazine, online publications, and family history and children’s books, including immigration and ethnic histories. Baer compiled the award-winning book Finding Indiana Ancestors, and she has authored magazine articles and book chapters on both genealogical and historical topics.

Indianapolis: A City of Immigrants costs $11.99 and is available from the IHS's Basile History Market.
Posted by Indiana Historical Society Press at 9:23 AM 1 comment: