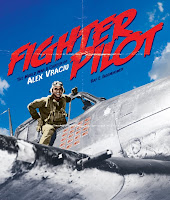 On the morning of June 19, 1944, as U.S. troops were battling Japanese forces on Saipan in the Mariana Islands in the Pacific, American pilots based on aircraft carriers offshore rushed to their planes to protect their fleet from an enemy attack from the air.

Calling the mission a “once-in-a-lifetime fighter pilot’s dream” when he spotted a large mass of enemy planes bearing down on the U.S. ships, one navy pilot from Indiana, Alex Vraciu, flying a Hellcat fighter from the USS Lexington, pounced on the Japanese and shot down six dive bombers in just eight minutes. “I looked ahead,” Vraciu later told a Chicago Tribune reporter. “There was nothing but Hellcats in the sky. I looked back. Up above were curving vapor trails. And down on the sea, in a pattern 35 miles long, was a series of flaming dots where oil slicks were burning.”

Written by award-winning biographer Ray E. Boomhower, Fighter Pilot: The World War II Career of Alex Vraciu, the sixth volume in the Indiana Historical Society Press’s youth biography series, examines the daring exploits of the Hoosier flier during his wartime career. A graduate of DePauw University, Vraciu learned to fly during his college years through a government program and joined the navy before America was thrust into the war following the Japanese attack on Pearl Harbor on December 7, 1941.

Possessed with keen eyesight, quick reflexes, excellent shooting instincts, and a knack for finding his opponent’s weak spot, Vraciu became skilled in the deadly game of destroying the enemy in the skies over the Pacific Ocean. For a period of four months in 1944, Vraciu stood as the leading ace in the U.S. Navy. He shot down nineteen enemy airplanes in the air, destroyed an additional twenty-one on the ground, and sank a large Japanese merchant ship with a well-placed bomb hit.

Vraciu’s luck, however, finally ran out on December 14, 1944, during a strafing run against a Japanese airfield before the American invasion to retake the Philippines. Luckily he was almost immediately rushed to safety by a small group of U.S. Army in the Far East guerrillas, who had been battling the Japanese in the area for the past few years. The navy pilot spent the next five weeks with the guerrillas, receiving the honorary rank of brevet major while with them. Vraci finally marched into an American camp carrying with him a captured Japanese Luger pistol and sword.

Fighter Pilot costs $17.95 and is available from the IHS's History Market.
Posted by Indiana Historical Society Press at 7:44 AM

So good topic really i like it thank you for the post, can you visit my modest blog please, here two best documentaries online: The Slender Man Documentary Online and the seconde is: Watch The Corporation online
thanks again